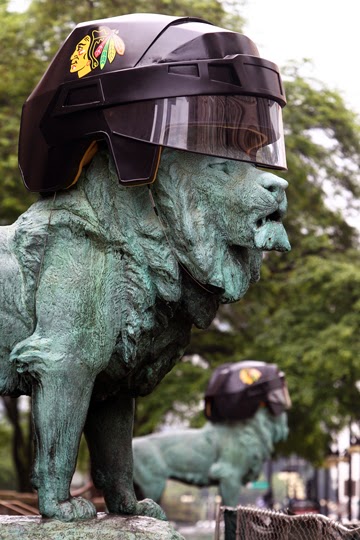 The Goalie is one very important player in a hockey game.

Think about it… he is out on the ice the whole game. While people are shooting pucks flying at an average of 80-90 miles and hour at him.  Additionally these players are looking for any weakness, any movement that might telegraph which way he is moving. They are trying to out wit, and out play you, and shoot this puck that can really hurt you. When they are not shooting at you they some times come into your space and and thrash at your feet with these sticks that can also hurt you. If by some reason that puck does get by you… the fans might boo you, teammates,  referees, and club owners all lack real understanding of your job. In their minds you were the major reason the game was lost… nothing else matters.

This is fun? Don’t know about you… but this isn’t a job I’d want. Talk about major stress!~ The Goal tending (goalie) position is not so much a physical skill as it is a mental skill.  As the goalie, you have to make split second decisions, and have unshakeable confidence.

If the goalie has FEAR the game is over. Fear is the mind killer. The goalie must always believe in his abilities.  When a player misses a shot or misses a pass no one says anything… but if the goalie misses the save… that could cost the team the game.

FEAR is False Evidence Appearing Real. When we have “fear” we doubt ourselves, start second guessing decisions, you start making mistakes and sets you up for failure. Fear takes you out of rhythm. Whether it is the rhythm of the game or of your business. FEAR can be the reason your business fails.

What is important is to give your work 100% of your effort. Do not fear failure. Many success stories are built on a failure. Learn from your mistakes, and to keep going. When I work with my business and entrepreneurial clients I tell them to write a message for themselves that will motivate them to keep going when times get tough.  In my office I have ” Dreaming has a low ROI ( return on Investment), start building and act today. We all need to develop the goalie mindset to give our jobs 100% everyday, every moment. Because like the goalie only the next save matters.